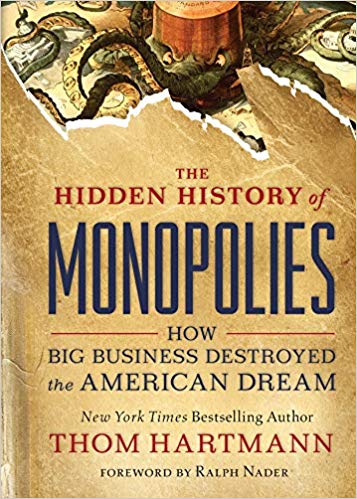 The Hidden History of Monopolies: How Big Business Destroyed the American Dream

The monopolistic power of companies like Walmart, Amazon, Facebook, and Google distorts and corrupts the American economy—but Thom Hartmann, America's #1 progressive radio host, shows we've broken the control of behemoths like these before, and we can do it again.

The biggest problem facing America and the world right now is "bigness." Our industrial and economic sectors—from tech, retail, and media to agriculture, food, and more—are so big that they're beyond the control of citizens, consumers, or the government (in fact, they've captured the latter). Similarly, the billionaire class has gotten so big in terms of wealth that its members have easily corrupted our politics to direct more and more of the nation's wealth and resources to themselves. But America was birthed in a revolt against a monopoly—remember the British East India Company and the Boston Tea Party? If Jefferson and Madison could see how government and business collude today, they'd weep. Hartmann explores how the intentions of the Founders were thwarted and describes commonsense, historically rooted measures we can take—such as revitalizing antitrust regulation, taxing great wealth, and getting money out of politics—to wrest control of our country from the monopolists.